David Limbaugh » Books » The True Jesus: Uncovering the Divinity of Christ in the Gospels 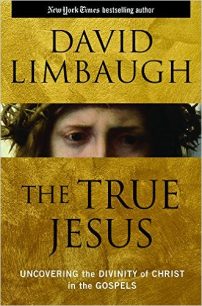 The True Jesus: Uncovering the Divinity of Christ in the Gospels

David Limbaugh, the New York Times bestselling author of Jesus on Trial and The Emmaus Code, now approaches the question of Jesus Christ’s divinity–In what sense was Jesus God? How do we know?–with the same precise, methodical form of inquiry he has employed in his career as lawyer and law professor. Examining the New Testament closely, Limbaugh zeroes in on esoteric passages not commonly linked to Jesus Christ’s divinity and draws forth startling new evidence that Jesus was Creator–not created.

“One of the best books I have read in years. If you are an unbeliever, this book will transform life and your heart and send you to the Bible for the truth. For believers, this book with help you fall in love with Jesus all over again.”

“This was a great book. The Bible will never be the same.”

“The True Jesus is a profound work of scholarship and of faith. You will fly through it, not because it is written simply, but because it is simply well written.”