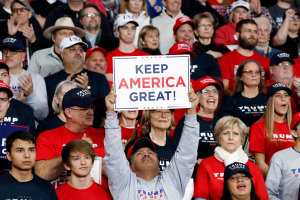 If the first week of leftist insanity gushing from President Joe Biden’s executive pen doesn’t vindicate Donald Trump’s supporters in full measure, I don’t know what could. Scratch that. There is much more to come.

Trump supporters have long touted the former president’s impressive policy achievements as proof they were wise in supporting him and correct that an outsider could get results.

We’ve learned in the past few months who is running this country: the media, the social media oligarchy, cancel culture and leftist dark money being poured into the system. These forces have weaponized identity politics and empowered the Democratic Party to regain control and move this country leftward at warp speed, which means destroying prosperity and jobs.

Trump haters have been salivating for years over an opportunity to finally bring him crashing down in disgrace, and take his allegedly evil supporters along with him — never to rise again and impede their progressive agenda.

They tried for Trump’s entire term to overturn the results of the 2016 election. They engaged in a coordinated effort to undo what the voters had done, corrupting our security agencies and our government institutions to lead a soft, sophisticated coup that makes Jan. 6 look like amateur hour.

With assists from the media and the rest of the leftist political and cultural establishment, these forces escaped accountability and proceed as cavalierly as ever, as if nothing ever happened. In a particularly in-your-face move, these bullies have designated one of the central players in the coup, Rep. Eric Swalwell, to be an impeachment manager in their post-term impeachment gambit.

This Trump-hating cabal is convinced it finally hit pay dirt with the events of Jan. 6. With ferocious intensity, they’re pushing the narrative that Trump himself incited an insurrection to violently overturn the government.

Feel free to debate Trump’s culpability in all this (and ignore his express words calling for a peaceful march), but you should take a moment to reflect on this bad-faith attempt to tie rank-and-file Trump supporters to this event and viciously depict all of them as radical white supremacists.

The overwhelming majority of Trump supporters have consistently condemned violence no matter the source. They did not and would not support the storming of the Capitol. No matter how vociferously the left claims otherwise, the millions of Trump supporters are still America-loving, Constitution-respecting, rule of law-advocating patriots. Despite the left’s best efforts, Jan. 6 does not discredit Trump supporters. This is not merely a technical point, because Trump haters want to vilify all of us both as a matter of pride and to render us impotent as a political movement.

As part of this, they seek to malign the millions of Christian Trump supporters as having sold their souls and betrayed their faith. Certain prominent Trump haters have viciously and personally denounced the Christian right. Meanwhile, they have little to say of Biden’s already unveiled leftist extremism and his dedication to a godless, pro-death agenda.

These Trump-loathing Christian bashers speciously complain about our poor witness for having supported Trump. But what of their own witness in categorically slandering Christian Trump supporters who, in good conscience, supported him for the good of the nation — and still have no apologies for doing so, especially considering the undeniable alternative?

In his recent piece, New York Times columnist Thomas Edsall cites the book “Taking America Back for God,” by college professors Andrew Whitehead and Samuel Perry, who describe Christian nationalism as including “assumptions of nativism, white supremacy, patriarchy and heteronormativity, along with divine sanction for authoritarian control and militarism.”

Edsall cites another recent book, “The Power Worshippers: Inside the Dangerous Rise of Religious Nationalism,” by Katherine Stewart, in which she describes the Christian right as “a political movement” and says “its ultimate goal is power. It does not seek to add another voice to America’s pluralistic democracy, but to replace our foundational democratic principles and institutions with a state grounded on a particular version of Christianity.”

According to Perry, “The Capitol insurrection was as Christian nationalist as it gets.” Perry points to “the use of sacred symbols during the insurrection such as the cross, Christian flag, Jesus saves sign, etc.” and “the language of the prayers offered by the insurrectionists,” presumably to show all Christian Trump supporters are white revolutionary anarchists.

The glaring irony is that Christians are not the fascists in this equation. They do not support a Christian theocracy, though they believe they should have a voice along with other individuals and groups in society. They oppose authoritarianism and fascism, which is actually the calling card of the Trump-hating left, and they would never attempt to silence others who disagree with their politics or religion. They are not the victimizers in this war on speech but the victims of the very leftists who falsely accuse them.

Neither white supremacists nor any other kind of rioting misfits from the right represent anything but a minute fringe of the Trump movement. To suggest otherwise is grossly disingenuous.

Fellow Christians on the political right and fellow Trump supporters: Don’t be disheartened or defeated by these efforts to stereotype us as violent and authoritarian. It is just another one of the abominable lies these fascist forces are disseminating to dispirit and weaken us and thus greenlight their ongoing assault on our values and institutions.